Earlier this week I went on a guided tour in Roncey, a small Normandy village in La Manche region. For over an hour we heard the story of how Roncey was liberated on 29th July 1944, the destruction and the re-building after the war. 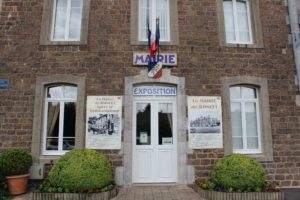 The American troops that had landed at Utah Beach on 6th June began to advance inland and liberate towns and villages. A small area near St-Lô was selected and bombed extensively so that the defences could be penetrated. This led to the ‘Roncey pocket’ where German troops became trapped in Roncey in their attempts to flee the advancing troops. Their exit route was blocked by a broken down lorry and they could not escape. Fierce fighting and bombing ensued on 28th July until Roncey was finally liberated on 29th July. 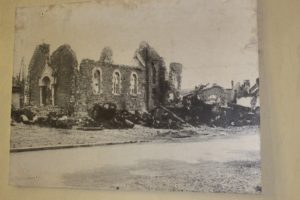 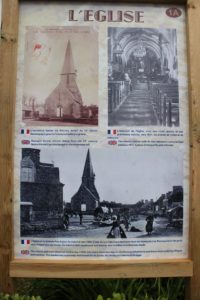 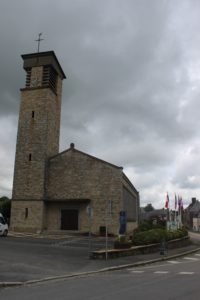 As well as the loss of life, around 70% of Roncey was demolished. The town hall (Mairie), school and the presbytery remained. The church was demolished along with 46 houses. 43 other dwellings were damaged and further damage was caused by pillaging and bulldozers clearing the village. The photos above show the church as it was, after it was destroyed and the modern structure that has replaced it.

There are a number of information boards throughout the village in both French and English with photos showing how the village used to look. 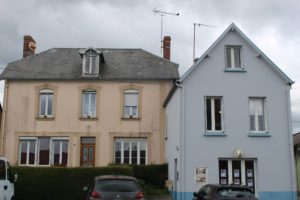 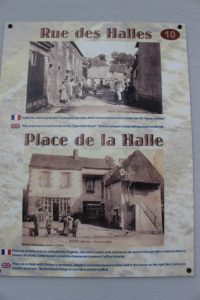 The information board above showing Place de la Halle is on the blue building in the photo above. 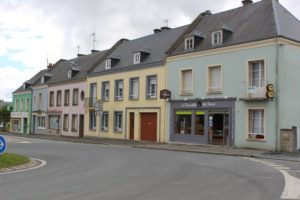 This row of brightly coloured houses and shops are directly opposite the church and the main square. They were completely demolished on 28th to 29th July.

The buildings were rebuilt using concrete and brightly painted. Here you can see an example of a new building (salmon pink in colour) contrasting with an older building that survived the bombings. 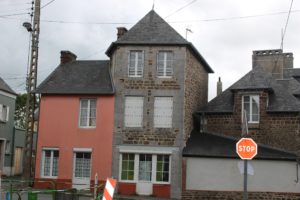 There is also an exhibition in the town hall. Their opening hours are:

For information about the guided tour in Roncey and others, please see this information. The tour will be repeated on 26th July and 9th August. You meet at 11am near the church, it’s free and you don’t need to book. The tour is in French but the panels as you walk around the village are in French and English.

What’s On In Coutances Cathedral

The Colourful Gavray Market in Normandy