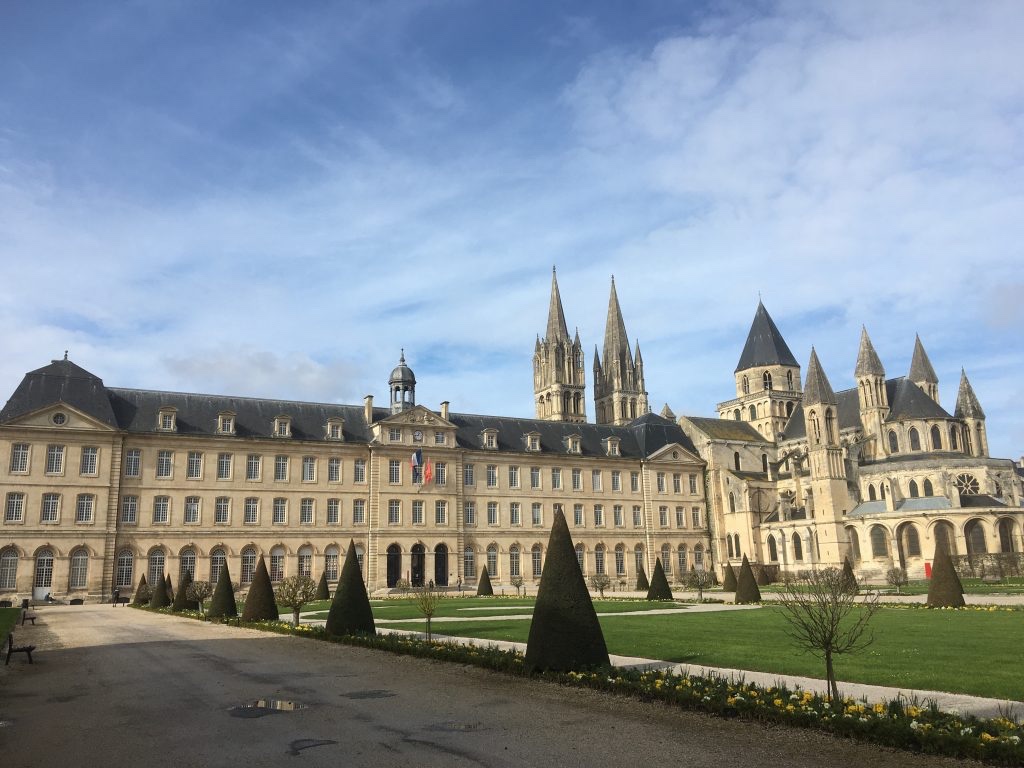 The Men’s Abbey in Caen was founded in 1063 by William the Conqueror. There are two key parts to this magnificent building which is known as l’Abbaye aux Hommes in French

The first is the abbey church of Saint Etienne and this is where William was buried. The church is free to visit and is a wonderful example of 11th century Normandy Romanesque art. The church was consecrated in 1077 in William’s presence. You can read more about the abbey church in Caen here.

The second part is the abbey itself and is made up of a series of buildings used by the Benedictine monks for prayer and everyday monastic life. These buildings are attached to the church and are now used as the City Hall. You can take a self guided tour or a guided visit of some of the ground floor buildings. Both tours are very reasonably priced and details are in the practical information section below. The buildings are impressive both inside and out and represent a walk through centuries of history.

The Creation of The Abbey

In 1050/51 William married his distant cousin Matilda. However, their union was frowned upon by the church and relations between Normandy and Rome were strained. Mediation towards the end of the 1050s led to a pardon from the Pope but with some conditions. As a penance, William was ordered to build two abbeys and four hospitals. The four hospitals were built in Caen, Bayeux, Rouen and Cherbourg. Both the abbeys were built in Caen and are the Men’s Abbey and the Ladies’ Abbey built respectively by William and Matilda.

The abbey was founded in 1063 and consecrated on 18 June 1066. On 25th December in the same year William was crowned as the King of England following the Battle of Hastings. The majority of the church was built between 1065 and 1077 and consecrated later that year. This intense building period was due to William’s rise in importance and the fact that building materials were readily available nearby. The Ducal Palace was built in the 14th century and this is at the rear of the abbey.

The Demise Of The Abbey

Between 1562 and 1563, the monastic buildings were badly damaged during the Wars of Religion. They were no longer able to accommodate the monks and, as a result, were demolished at the end of the 17th century. The bakery, apple press, coach house, Ducal Palace and the Guard’s Hall weren’t affected and still reflect the medieval origins of the abbey. The abbey buildings that you see today were rebuilt in the 18th century.

One of the permanent exhibitions at the abbey is entitled Anglo-Normand World. It looks at the links between Normandy and England from a religious and also an architectural perspective. Visitors can also read information about the abbey’s founding charter, property acts and deeds. You can view a copy of a charter with William’s signature on it. Plus, take a look at the seals used by William and other nobility including Richard the Lionheart.

This option is called ‘une visite decouverte’ and you stroll around by yourself. You’ll find the times and tariffs below. There are information boards in both French and English. Both the exhibitions in the abbey also have bilingual display boards explaining the key points. There is also the option to listen to an audio recording in English of the first exhibition. As you go in through the main entrance, the ticket office is just to the right. You’ll be given a small leaflet that has a plan of the route you take.

The first stop is the Calefactory or Warming Room. In French it is known as the chauffoir. The permanent exhibition about the Anglo-Normand World is set up here. A key feature of this room is the fireplace and is how the room got its name. It was one of the few rooms in the abbey that was heated. Benedictine monks lived their everyday life without comforts of any kind including heating.

Next you make your way into the cloister. I was lucky enough to be the only person taking the abbey visit so was able to enjoy the peace and quiet and enjoy the beautiful architecture. The cloister is relatively simple in design and is built in a Tuscan style.

The Services Board is stop 3 on the tour. It’s a carved oak board dating from 1744. The four columns indicate the times when the monks had to worship and the tasks they had to do during the services.

The former gatehouse (porterie) houses the second permanent exhibition. The gatehouse would have been the original entrance to the abbey as it led through to the parlour. It was also opposite the Ducal Place where important guests were accommodated. The exhibition looks at the events of the summer of 1944 following the bombings. Photos, texts, letters, audio and video accounts show how Caen inhabitants went about their everyday life until the city was liberated. There is one of two staircases in this room and you also get to see the other at the end of the tour.

After that you retrace your steps and return to the entrance hall. From here you can go through and admire the grand staircase. It leads to offices so you can’t go up to the first floor. However, if you peer through the window on the left hand wall you can catch a glimpse of the Guard’s Room. La Salle des Gardes was built in the 14th century and was used as a reception room for guests. It acquired its current name in the 18th century despite never being a garrison for troops.

The final part of the tour is the Scriptorium and is where the monks studied and copied manuscripts. Temporary exhibitions are held here although there wasn’t one on when I visited. You can still go into the room which is light and airy as it has large windows along two of its sides.

You can browse the shop housed in the main entrance hall before you leave.

These 50 minute tours don’t need to be pre-booked but may be busier during the summer months. There are also a series of themed tours throughout the year in French. Taking a guided tour will allow you to see additional rooms in the abbey. They include the Guard’s Room, the apple press, the refectory, the parlour, the sacristy and the chapter house. The chapter house is known as the Salle Capitulaire and is where marriages take place nowadays. If there’s a specific room you’re interested in visiting, check whether it’s included on the regular guided visit or a themed one.

This page (in French) has a floor plan of the abbey and shows where the rooms on the guided and themed tours are.

The Sacristy leads through to the church and I was fortunate enough to get a glimpse of it. I happened to be passing as the door was unlocked by a member of staff. This room is where vestments, church furnishings and sacred vessels are kept.

The self guided tour is available throughout the year and you can take as long as you like. The cost is 3€ or it’s 5€ if there’s a temporary exhibition on.

The 50 minute guided tour entitled ‘An Exceptional Heritage’ doesn’t need to be booked and costs 8€ or 6€ depending if there’s an exhibition on. See below for details of tours in English.

The themed guided tours last one and a half hours. You need to book in advance and places may be limited. The tour will only go ahead if the minimum number of people book. They cost 9€ or 7€. The programme for the themed tours will be available online or by visiting the ticket office.

Opening Hours for the Self Guided Tour

Monday to Friday from 8am to 6.30pm. Weekends and public holidays from 9.30am to 6.30pm. The ticket offices closes 30 minutes before the abbey closes.

From 1st October to 31st March (except 25th December, 1st January and weekends in January)

Monday to Friday: contact the Abbaye aux Hommes No tours on Saturdays, only a self guided tour is available Sundays, school holidays and public holidays (except January): guided tours at 10.30am and 2pm.

From 1st July to 31st August

All tours are in French unless otherwise specified. Specific dates and dates will be advertised for the themed tours.

The Men’s Abbey in Caen is on Esplanade J M Louvel.

I used to go to La Ferme de la Butte in La Meurdraquière to buy Normandy cider for the gite. They were fairly local to me at around a 15 minute drive away. I included a bottle of their cider in my welcome basket for guests. In 2019 the farm was bought by another local…

Every year Granville Tourist Office produce a number of guides about what to do in Granville. There are usually three or four different publications and they can be picked up from one of their offices. In previous years they’ve produced a magazine, a brochure about forthcoming events, a guide to gourmet delights and a main…

Vauville Botanical Garden is tucked away on the Cotentin peninsula in Normandy. It looks out onto the Channel Islands and the headland known at Le Nez de Jobourg. Visiting the garden is very much like entering a Tardis as 11 acres unfold in front of you. The site benefits from a microclimate where the evergreen…

A young priest from Normandy succeeded in restoring a magnificent abbey that had been destroyed on three previous occasions. Lucerne Abbey was founded in the mid 12th century. It was destroyed during the Hundred Years’ War and also during the Religious Wars. During the French Revolution a wealthy local ship owner bought the abbey and…

Regnéville is a delightful Normandy village and an important port dating from the 11th century. It sits at the mouth of the river Sienne and looks out onto a natural harbour surrounded by marshland. The first settlers in the village were Vikings who arrived by boat. The harbour enabled goods to be transported into the…