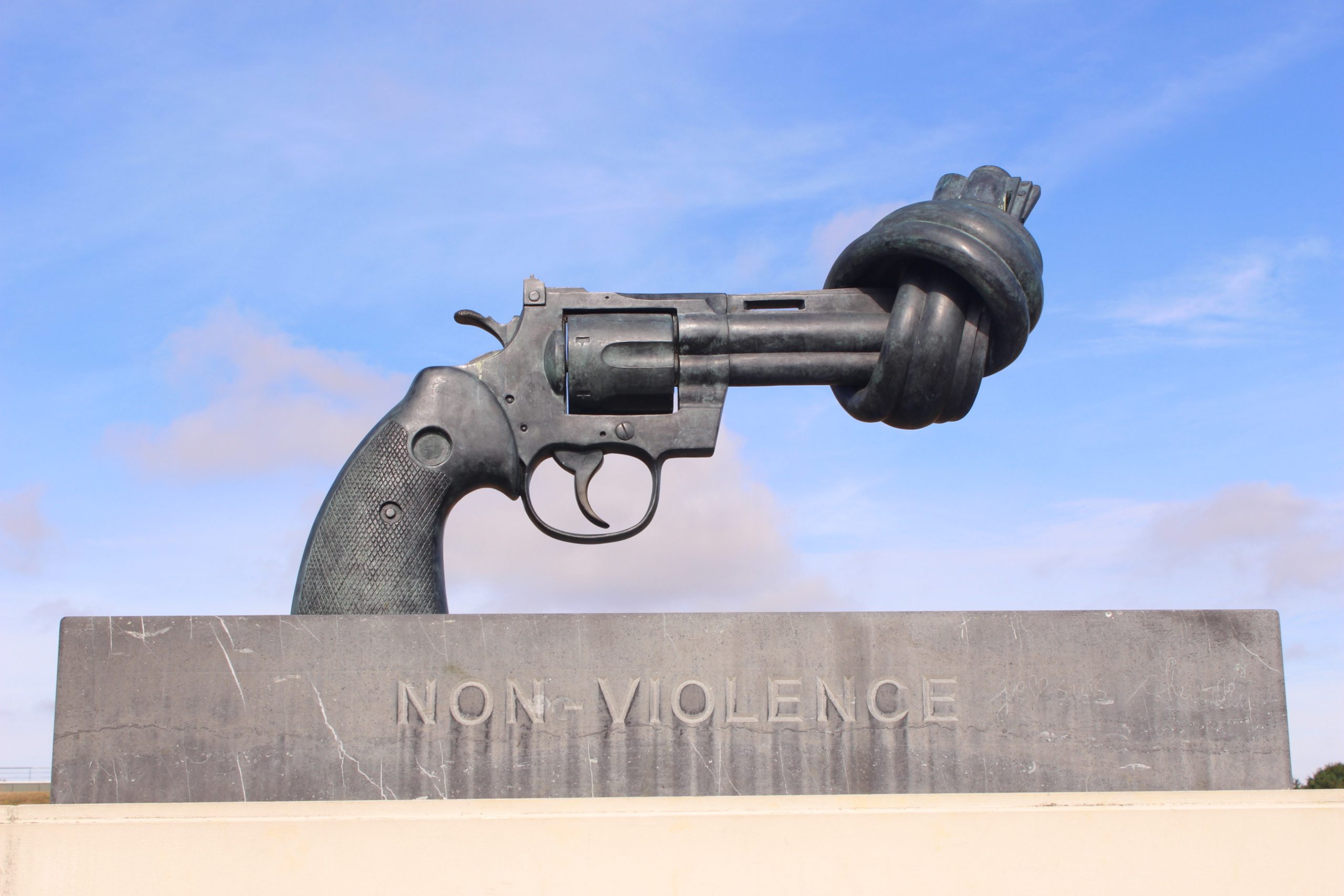 The Knotted Gun sculpture is an amazing piece of art. I took this shot when I visited the Caen Mémorial Museum, Centre for History and Peace. It’s displayed in the grounds of the museum close to the entrance.

The sculpture is also known as the Non-Violence sculpture. The Swedish artist Carl Fredrik Reuterswärd created this piece in bronze following the shooting of former Beatle John Lennon in 1980.

The sculpture was created as a memorial tribute with the idea behind it being a vision of a world at peace. Initially, the sculpture was placed in the Strawberry Fields memorial in Central Park in New York. In 1988 the Government of Luxembourg donated it to the United Nations. It has remained outside their headquarters in New York ever since.

Since 1993 the sculpture has been the symbol of The Non-Violence Project. They are a nonprofit organization that promotes social change through violence-prevention education programmes.

There are 31 copies of the Knotted Gun sculpture around the world.

A number of my guests have brought their bikes to Normandy to enjoy some cycling. Normandy has 1600km of véloroutes (cycle routes) giving you cycling itineraries via traditional cycle paths or secure roads with little traffic. The cycle routes are designated by special signposts. 700km of these routes are greenways (or voie vertes in French)….

This chocolate-box Normandy water mill in Rethoville dates from the 18th century. It’s in the north east of La Manche region of Normandy between Cherbourg and Barfleur. Originally called la Coudrarie water mill it’s now known as the Marie Ravenel water mill. This is in homage to the miller’s daughter and celebrated poet who lived…

This photo of the abbey in Hambye is another favourite from my photo collection. The abbey is a medieval Benedictine monastery that was founded in 1145. This photo is taken from the apse of the abbey church. You can see the flying butters structures overhead and also the church’s tower. There’s no roof to the…

If you’re looking to buy a selection of cheeses, why not take a look at this cheese shop in Granville? When I visited Au Carnaval des Fromages in Granville they kindly allowed me to take photos of their lovely shop. They’ve been cheesemongers for over 35 years and were originally based in Camembert in the…

Galerie Sur Le Pont is a recently established art gallery in Gavray in Normandy. There are two rooms dedicated to the gallery where you can browse and purchase artwork from local artists. There’s a wide range of styles and techniques on display and entry to the gallery is free. You can also take art classes…